Last week CodinGame.com hosted a Spring Challenge, it's a 10-day bot programming competition that I gave a try and wanted to share my thoughts.

The contest is held yearly and this time about ~8000 people participated with at least a single submission. The idea revolves around creating an AI for a game - in this particular case the goal is trivial: protect your base and outlive your opponent. Players start at opposite corner of the map and control a team of 3 heroes while monsters randomly spawn at the edges and regularly attack bases, if a monster reaches one's base it deals damage. Heroes can kill monsters, gain 'mana' for each damage dealt and can cast a few spells.

I always wanted to do something similar locally, i.e. code a simple game and create an AI for that, ideally leveraging massive number of simulations. Except for controlling the environment itself, CodinGame checks pretty much all required boxes, and it works in a multiplayer mode! I intended to spend only a few hours to find out how polished the platform is - to my surprise when 3 days later I clocked in ~10h+. Delight at its finest.

This was my first try at such type of contests so whatever you read here should be taken a with a grain of salt. Having said that, let me describe the road I took to get to Gold league - it should be quite representative of what one can expect from such events.

I started with the simplest tactic one can imagine: find the closest monster to my base and attack it with all we got. Hard to get simpler... yet it turned out to be an effective approach. My take on that is that everyone already moved to more efficient approaches but haven't managed to fully implement them yet.

Let's improve it and assign a single hero to a single monster. I also noticed a pretty severe bug in my trivial implementation - turns out that when sides are changed (roughly half matches) own hero identifiers change i.e. 0-2 on Blue side and 3-5 on Red side. Yes, it meant that I was loosing half games instantly [cough, cough].

New league, new toys. They gave us a few spells and introduced a fog of war. Because both bases were always out of fog of war and my brave heroes were always going for the closed 'visible' monster... they tended to run mindlessly into enemy base if all monsters on my side were killed. Additionally, enemies started using spells and more sophisticated tactics e.g. 2 defenders and 1 attacker. The first shift of meta.

Another set of naive improvements - let's ignore enemies further than X distance from my base.

This improved my score only slightly, I jumped about 200 positions and noticed that some games end with timeout where player with higher 'wild mana' wins (wild mana - mana gathered outside own base), given that my folk usually stay within base it's hard to win anything that ended due to round limit.

Coded basic 2-defender-1-attacker tactic, Also started using 'Control' spell on all monsters within range that are not heading towards enemy base and have more than 14 health points (Control spell forces a unit to move towards a given direction). Ignore fog of war for now. 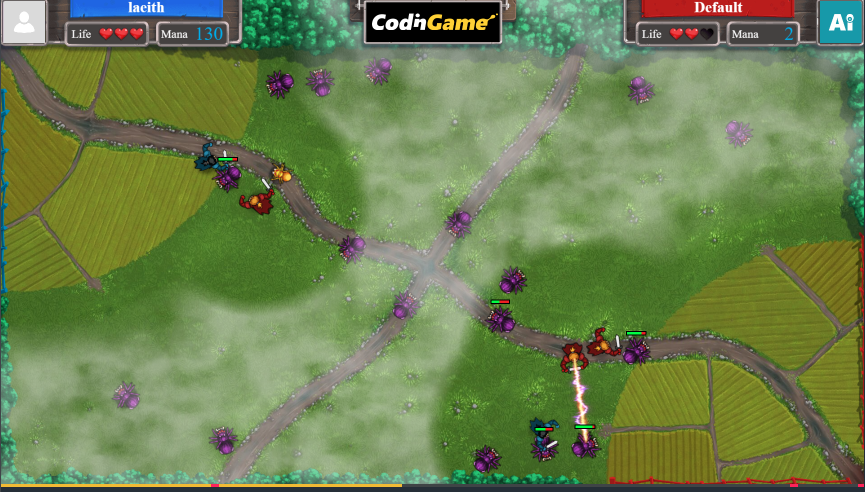 Submitted a new version, got to Bronze ~1500 and went to sleep. Got promoted to Silver overnight.

Silver leagues and the road to Gold

About 2000 players were moved to Silver with me, not bad. My solution was very hacky at this point, and opponents were getting fancier with their solutions all the time. After fixing a few more issues with defenders (e.g. they tended to stick a little too close to the middle, wasting too much time on random monsters spawning next to my base). This didn't do much for my overall score, top ~1300.

I decided that it's time for a big bang rewrite as the approach is not too flexible. After another hour I was in slightly better shape with fewer magic ifs, functions and random numbers. Got back to working on strategy and tactics again, this time I wanted to invest more upfront before submitting my version for evaluation.

This got me into top 70 (TOP 7 in Poland) and Gold league was opened on the following day! Seemed very promising given that I still could think of plenty improvements on both def and off sides (better combos, better farming, less reliant on magic numbers, better timing for offense, take enemy position into account when defending, number of enemies, simulations, local-system parameter evaluation etc.), plus my implementation was... less than ideal.

Then I had to take a break for a few days. In fact that was my final submission.

Over time my AI started loosing its appeal, people caught up and even surpassed my score. Eventually, I ended the competition in top 800 a week later without any additional submissions. 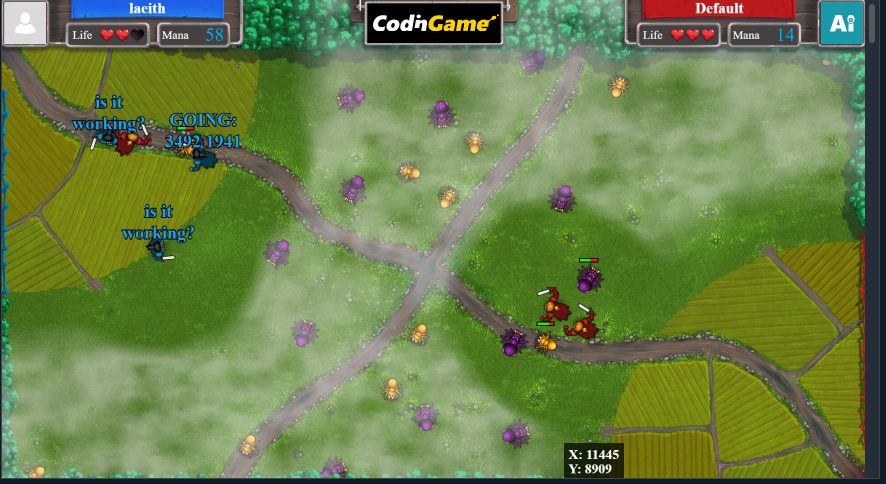 This was a very interesting venture into the classic engineering loop:

Enjoyment was absurdly high. Albeit, I felt a little disappointed when my AI got demoted into TOP 800 (out of ~8k participants) during my absence - I was hoping for a better final placement despite my inactivity! Anyway, probably still a reasonable placement for a first timer.

It scratched my competitive side a lot. Next time I need to set up a better schedule so that I have enough time to at least give it a full try.

A few final thoughts about the game itself: